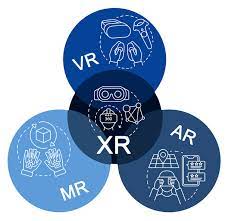 Extended Reality (XR) is a recently coined umbrella word for all immersive technology. The ones we already have—augmented reality (AR), virtual reality (VR), and mixed reality (MR), and those still to be developed. All immersive technologies either merge the virtual and real worlds or provide totally immersive experience to expand the reality we experience. According to recent study, more than 60% of respondents predict extended reality will become mainstream over the next five years.

In AR, information and virtual objects are superimposed onto the real world. This experience elevates the real world through digital details like images, text and animation. The experience can be accessed through AR glasses or displays, tablets and smart phones. This means that users are not isolated from the real world. Also they can nevertheless interact and see what is happening in front of them. The best-known examples of augmented reality are: Pokémon GO, which superimposes digital creatures on the real world. Snapchat filters that place digital items like hats or glasses on your head.

In contrast to augmented reality virtual reality is entirely immersive. It tricks your senses to believe you are in a different location or world from the real one. Individuals must put on a VR headset or head-mounted display to gain a 360-degree view of an artificial world that tricks their brain into thinking they are, for example, walking on the moon, swimming beneath the sea, or stepping into whatever new universe the VR makers built. Although the gaming and entertainment sectors were early adopters of this technology, firms in a variety of areas, including healthcare, construction, engineering, the military, and others, are finding VR to be quite beneficial. This computer-generated world of graphics and sounds in which you may manipulate things and move about using haptic controls.

In mixed reality, physical and digital items coexist and may interact in real time. This is the most recent immersive technology, sometimes known as hybrid reality. In mixed reality, you interact and manipulate physical and virtual objects and environments, using next-generation detection and imagery technology. Mixed reality enables you to see and immerse yourself in the world that surrounds you, even when interacting with a virtual environment using your own hands—everything without ever taking off your headphones. It allows you to have one foot (or hand) in the actual world and the other in an imaginary environment, breaking down basic notions between the two and providing an experience that can revolutionize the way you game and work today. Microsoft’s HoloLens, for example, allows you to place digital items in the area you’re standing in and spin them around or interact with them in any way.

Furthermore, the cost of deploying the technology must be reduced; otherwise, many businesses would be unable to invest in it. Wearable gadgets that enable a full extended reality experience must be trendy and comfortable. It should be well connected, intelligent, and immersive. There are substantial technological and hardware concerns to address, including but not limited to display, power and thermal, motion tracking, communication, and common illumination—where virtual items in a real environment are indistinguishable from actual ones, particularly when lighting changes.